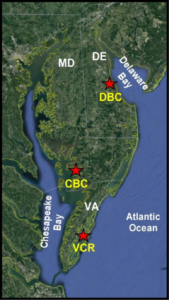 Ghost forests and abandoned farms are stark indicators of ecological change along world coastlines (Williams et al., 1999; Desantis et al., 2007; Anderson and Thani, 2016; Kirwan and Gedan, 2019) caused by sea level rise (SLR). These changes adversely affect land use and economies by reducing agricultural production, damaging surface and subsurface infrastructure, and degrading water quality (Khan et al., 2016). However, this change is also a positive indicator that our coastal marshes, and their crucial ecosystem services, may survive the effects of rising sea level (Kirwan et al., 2016a). Less apparent, but perhaps even more important, are the concurrent changes in function, mass and energy flux, and feedbacks within the coastal critical zone (CZ).

The primary driver of changes along the marsh-upland transition is gradual relative SLR, which pushes salt and inundation fronts inland via storms and tides (fast processes) while gradually elevating the water table (slow process). Secondary drivers of change include positive and negative feedbacks that occur as a result. The complexity of the system, with its strong hydrologic transience (e.g. tides, storms), tightly coupled ecosystem mosaics, biogeochemical inputs from both land and sea, and human influences make functioning and response at the marsh-upland transition difficult to understand and predict. While marsh ecosystems have been well studied, the transition from marsh to upland has only more recently come into focus. Our overarching hypothesis is that sea level rise is converting coastal forests and agricultural fields to salt marshes through two driving mechanisms: flooding and salinity increase. Both mechanisms involve feedbacks among coupled HEGB processes. The occurrence of these mechanisms and the nature of their feedbacks, which differ between forested and agricultural land, determine the rate and extent of landscape transformation and the associated changes in elemental stores and fluxes in the coastal CZ. Our project examines coupled hydrological, ecological, geomorphological, and biogeochemical processes and feedbacks that are unique to the coastal CZ, critical for understanding alterations to global elemental cycles and fluxes, driven by tidal to millennial timescales of change, and not currently considered by existing observatories.

To quantify the coupled processes and feedbacks that govern the HEGB transformations in the coastal CZ to understand how shifts in the transition zone will translate to changes in cycling, fluxes, and storage of critical elements at the land-sea margin.

Develop a fully collaborative, multi-disciplinary study at a network of sites to understand and predict current and future changes in coupled hydrological, ecological, geomorphological, and biogeochemical (HEGB) system.

Overview: Fast processes, episodic hydrologic events, are the primary mode for salinization and flooding along the marsh-upland transition. i, large-scale hydrologic setting (i.e., water table position and inland ability to rise), gradual hydrologic shifts, and land use (i.e., forest vs, agriculture) mediate the salinization and flooding resulting from fast process effects. High water tables reduce salinization relative to flooding, and land surface connectivity increases salinization relative to flooding. Together these processes determine the magnitude and rate of HEGB changes and feedbacks. Indications point to the importance of both fast and slow processes as well as their interactions, on the rate and magnitude of physical drivers of coastal change (H1), but these processes and their EGB effects (OH, H1) have not been systematically studied in the coastal transition zone

Team Management Plan: Hypothesis 1 lead Michael will communicate the tasks, responsibilities, and schedules listed in the strategic implementation plan to team members. All-team meetings will be held quarterly. Sub-project meetings will be held more often as needed. Yearly assessments of progress will be performed and compared to the strategic implementation plan. Any changes or remediation will be undertaken.

Objective: We will determine what are the major drivers of salinization and flooding at the marsh-upland boundary, and how are effects (the rate and extent of flooding/drainage and salinization/flushing) moderated by ecological and geomorphological characteristics as well as the large-scale (slow) hydrological setting?

Overview: Increases in salinity and flooding will cause tree and crop mortality. In forest ecosystems, root decomposition will reduce soil carbon and lower land surface elevation, resulting in more frequent inundation by saline surface water and higher water tables, creating a positive feedback where lower elevation zones become progressively more vulnerable to fast and slow hydrological shifts. In agricultural ecosystems, root mortality feedbacks will be small, but vegetation change (from crops to bare to marsh) and human alterations will dominate hydrological and biogeochemical feedbacks, generally increasing elevation gain and soil carbon. The rate and nature of landscape change will depend on the rooting depth of the dominant plants and the driving process of mortality (salinity vs. flooding; surface vs. subsurface). Together, these suggest that slow processes (i.e. sea level rise, groundwater salinization from below) may influence the migration of the marsh and understory terrestrial vegetation whereas fast processes (i.e. intermittent flooding, salinization from above) influence the evolution of the canopy. It remains unknown whether vegetation change simply responds to changes in environmental conditions or actually influences environmental conditions via changes in elevation.

Team Management Plan: Hypothesis 2 lead Gedan will convey the experimental tasks, responsibilities, and schedules as laid out in the strategic implementation plan to all team members. Teams will meet quarterly. Sub-project meetings will be held as needed. Annual assessments of progress toward goals and milestones will be compared to the strategic implementation plan. Any alterations will be made.

Overview: Slow and fast hydrological processes will change soil and water salinity and redox conditions that will alter nutrient (e.g., phosphorus [P] and nitrogen [N]) and C stores, composition and fluxes at the marsh-upland transition. Differing rates and persistence of inundated and saline conditions due to fast and slow hydrologic processes will affect cycling of redox-active elements (e.g., iron [Fe] and sulfur [S]), organo-mineral assemblages, and mineral-nutrient stability in soils and sediments. If C and P are associated with poorly crystalline Fe minerals, they are more susceptible to leaving the systems upon flooding due to redox changes. Inundation will cause flushing of C, N, and P from the system, which is exacerbated with increases in salinity. Further, the dominant biogeochemical processes will differ between marsh-forested and marsh-agricultural transitions within the CZ. It is unknown how the hydrological dynamics and water chemistry will alter C mobilization/sequestration in marsh-forest and marsh-agriculture transition zones. A primary objective is to determine which key hydrological and biogeochemical factors influence soil organic carbon (SOC) loss or sequestration.

Team Management Plan:  Hypothesis 3 leads, will convey the experimental tasks, responsibilities, and schedules as laid out in the strategic implementation plan to all team members. Teams will meet quarterly. Sub-project meetings will be held as needed. Annual assessments of progress toward goals and milestones will be compared to the strategic implementation plan. Any alterations will be made.

Objective: We will determine how changes in salinity and redox conditions tied to fast and slow processes will affect N, P, and C composition, lability, and the sequestration potential of marsh-forest and marsh-agricultural soils?